We’ve helped arrange a lot of elopement weddings over the past 6 years.   Literally hundreds.  I often ask couples about their reasons for eloping – why did they make this choice?  It helps me understand what might be going on for them as a couple but also informs me more generally about why couples might want to elope so I can make sure we’re offering people what they’re looking for.

So I’ve heard a lot of reasons for eloping and I want to know if you share one of these or if you have your own reasons.

First up I want to make it super clear that none of the photos in this blog post are here because they had one or any of the reasons to elope I’m talking about here.   The pics are here because they’re nice elopement pics (all taken by our lovely elopement photographer Clare Kinchin) not because they illustrate any of the reasons mentioned.   I don’t want anyone seeing a photo here and putting 2 and 2 together and making 5 and getting upset.   Ok, we got that important disclaimer out the way… 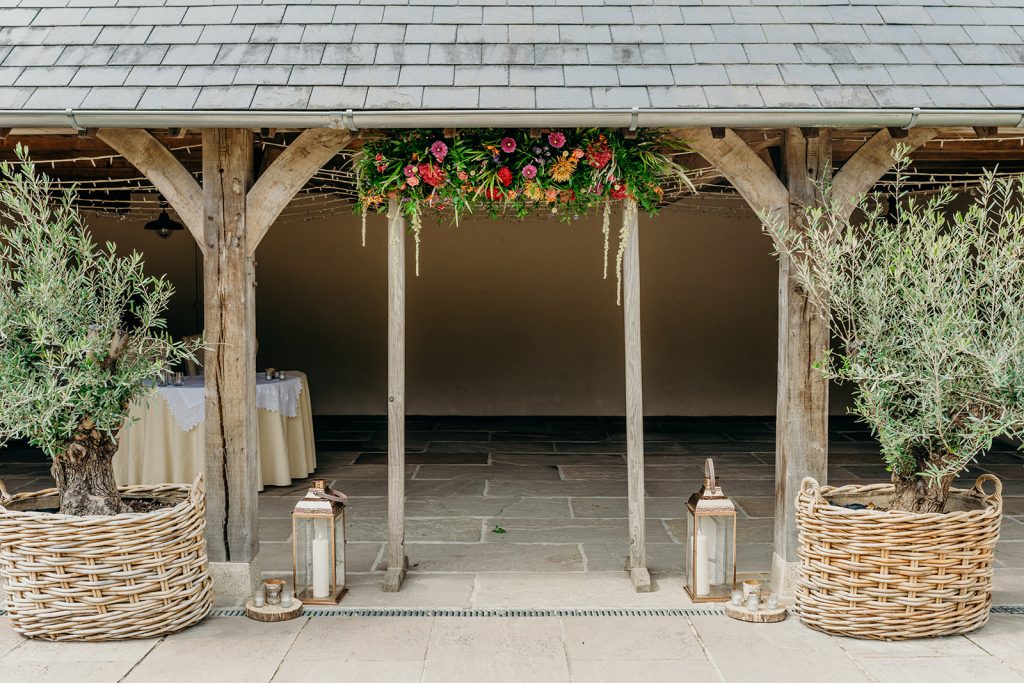 This is the one of the main reasons for eloping.  People either don’t have family or maybe they do have family but they don’t want them at their wedding.

Maybe there are people who don’t get on or maybe there are some family dynamics (divorced parents being the most common) which the couple don’t want to play out (or risk playing out) on their wedding day.

If you’ve got family issues steering you towards an elopement, it’s best not to invite those people to your wedding at all, elopement or not.   With a big wedding, guests can avoid each other on the day.  With an elopement wedding, there are fewer places to hide, fewer opportunities to avoid those potentially tricky encounters.

So finding somewhere you can get married just the two of you could be the answer.  Because let’s face it, even if those family members promise you they’ll behave on the day, you’re still going to worry about it, wonder if they can keep a lid on it after all.  And that’s not how you want your wedding day to be.  Am I right? 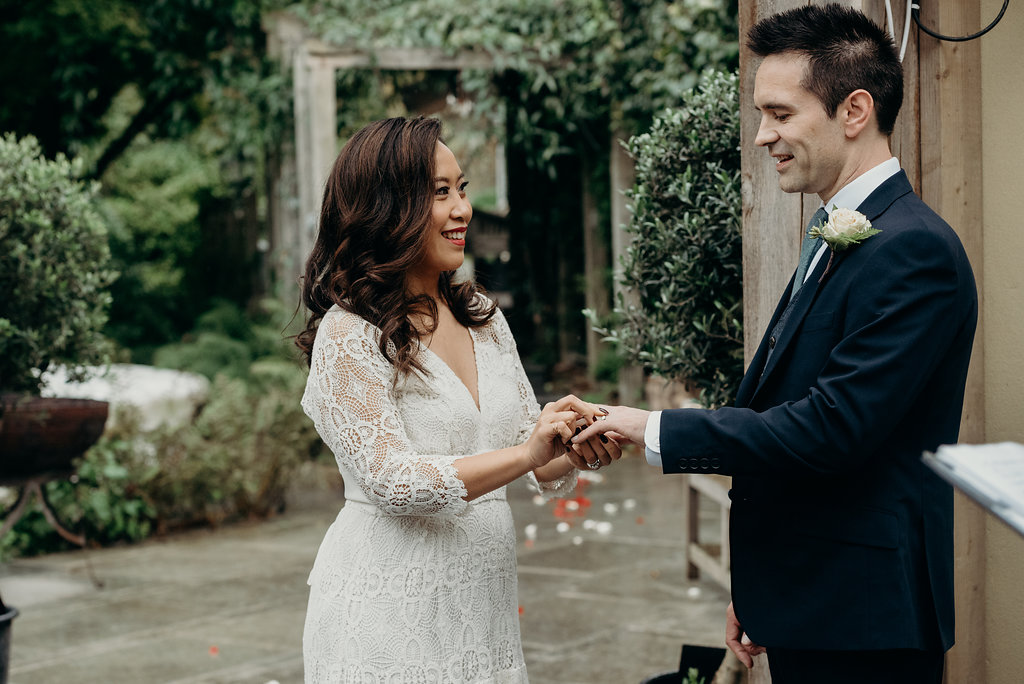 Kind of linked to the first one but a different aspect of families – equally unwelcome.  When they announce their engagement, quite a few of our couples come under pressure from their families about how their wedding ‘should’ be.   Whether that’s where they should get married (church, home, particular venue), the date they should marry or who should be invited to the wedding.

That pressure can be hard to withstand and even more so if someone else is wielding a cheque book.  They think because they’re paying, they get a say in how your wedding should be.   And sometimes, the only solution to that is to say ‘thanks but no thanks’ to the money and go your own way.   And you book an elopement wedding where you can do exactly what you want and have your wedding, your way. 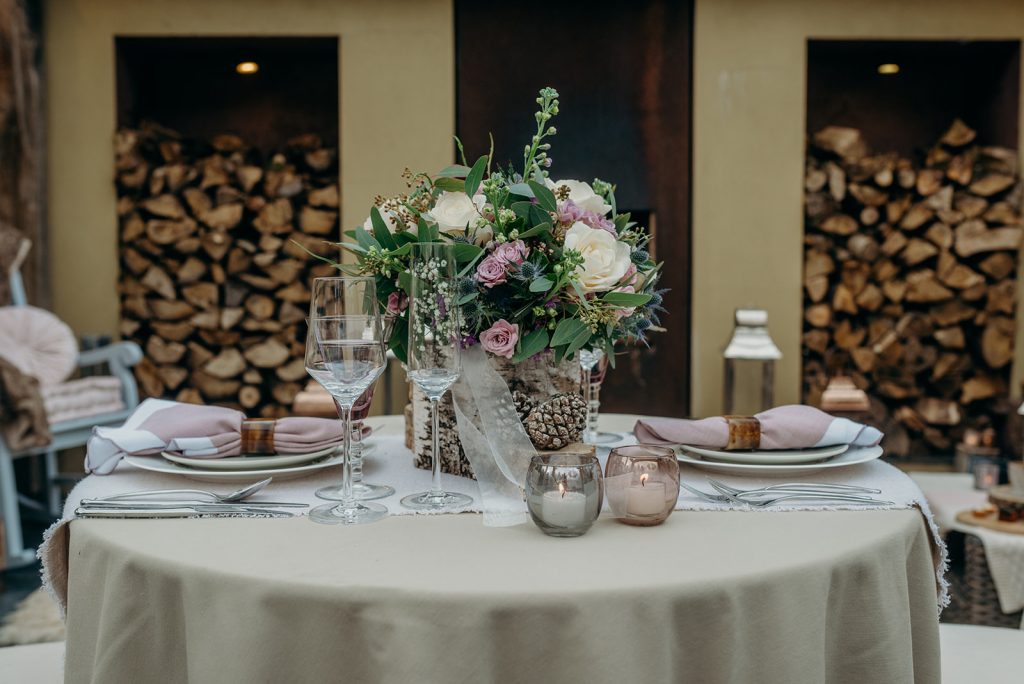 We’ve had a number of couples who’ve met & live in this country but either one or both families live overseas.  Flying in one (or both) families from the other side of the world can be complicated not to mention hideously expensive.

So the couple elope here and have a big celebration later with family where they live.  Much easier (not to mention cheaper) for the couple to fly overseas and celebrate there but they’ve got legally married here.

Quite a few couples get engaged (yay!), start planning their big wedding and then when they start on the guest list it grows and grows and grows.  And they’re up to a couple of hundred people.   For some people, that’s great – massive, big wedding here we come.  For some couples, it’s an unaffordable nightmare but then cutting the guest numbers becomes impossible so they hit a brick wall.    How could they cut that person?  Or that one?  And if they cut that person, then how can they invite this other person?

Being able to cut guest numbers to a minimum (or maybe having none at all) by eloping could be the answer.  Many of our elopement couples either have no guests or just a few and then hold a big party later which they can do much more cheaply by hiring a non-wedding venue or by having a party at home.   Wedding – tick.   Party – tick.   Didn’t have a load of strangers at my wedding – tick.  Still got money in the bank – tick. 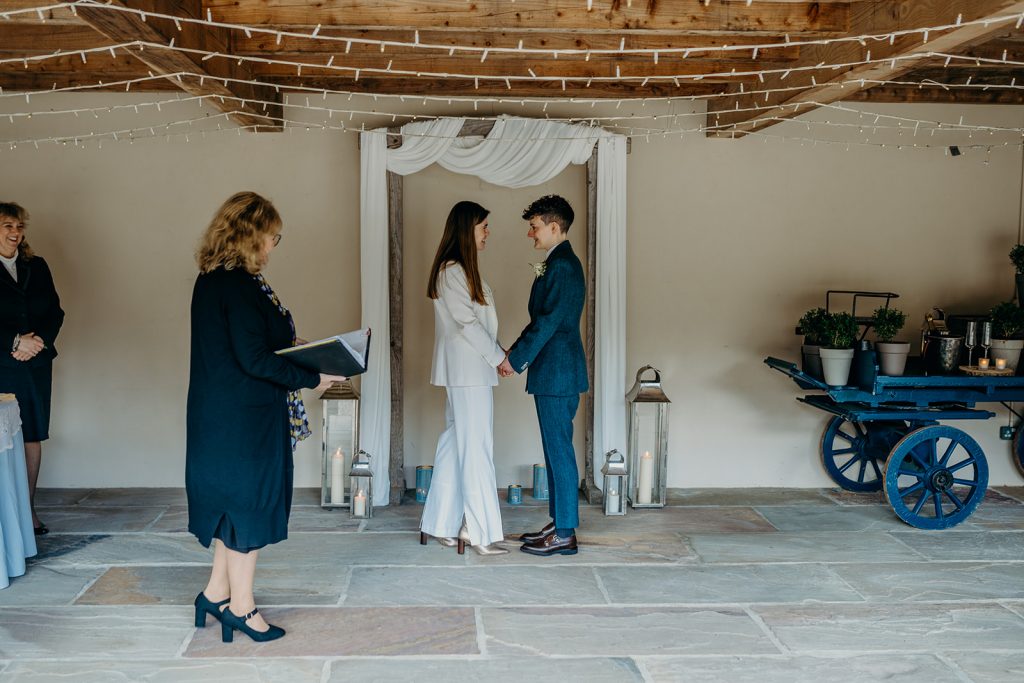 I’ll be honest.  When I started the elopement weddings, I thought this would be the major part of our business – couples getting married for a second time.  I figured that would be high on the list of reasons for eloping.  Sure, we do have quite a few second time arounders but not as many as I thought.   The majority of our couples are getting married for the first time which I love but it’s unexpected.

What I do hear from a number of second time arounders is how much they cherish the chance to focus on just the two of them with an elopement.  They’ve often got grown up children and grandchildren and family is a huge part of their lives.   But they rarely get the chance to have quiet time together without looking after everyone else.   An elopement wedding gives them the chance to do that – to focus on each other and why they’re getting married. 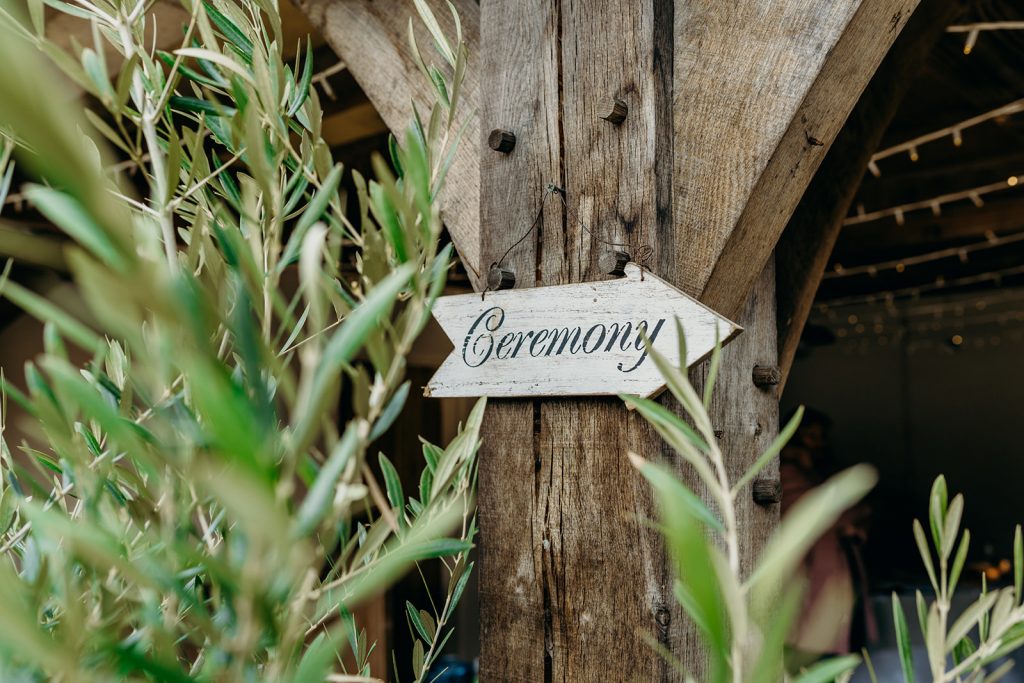 And this is another one to add to reasons for eloping that I didn’t expect.  Quite a few of our couples don’t want to be the centre of attention, they’re shy about being looked at by a lot of people, even people they know.

For some, a big wedding is just not their thing.  For others, it would be utterly terrifying and no-one needs that on their wedding day.

So again, an elopement could be the answer you’re looking for.   No need to skimp on those gorgeous wedding details – have them but ditch the stage fright.  Winning!

Weddings are expensive aren’t they?   There are lots of ‘average costs of a wedding’ stats out there but our experience of big weddings is that our big wedding couples typically spend over £20,000.  And that’s a lot of money in anyone’s book.

So you don’t want to spend that kind of money (I hear you) but let’s face it, if you wanted to spend no money at all you wouldn’t be here, you’d be down the Registry office in your lunch hour and celebrating afterwards with an M&S prawn sandwich.  But you’re not doing that, you’re here because you’re looking for a solution to the big wedding but don’t-want-to-take-out-a-second-mortgage question – and that’s where we come in. 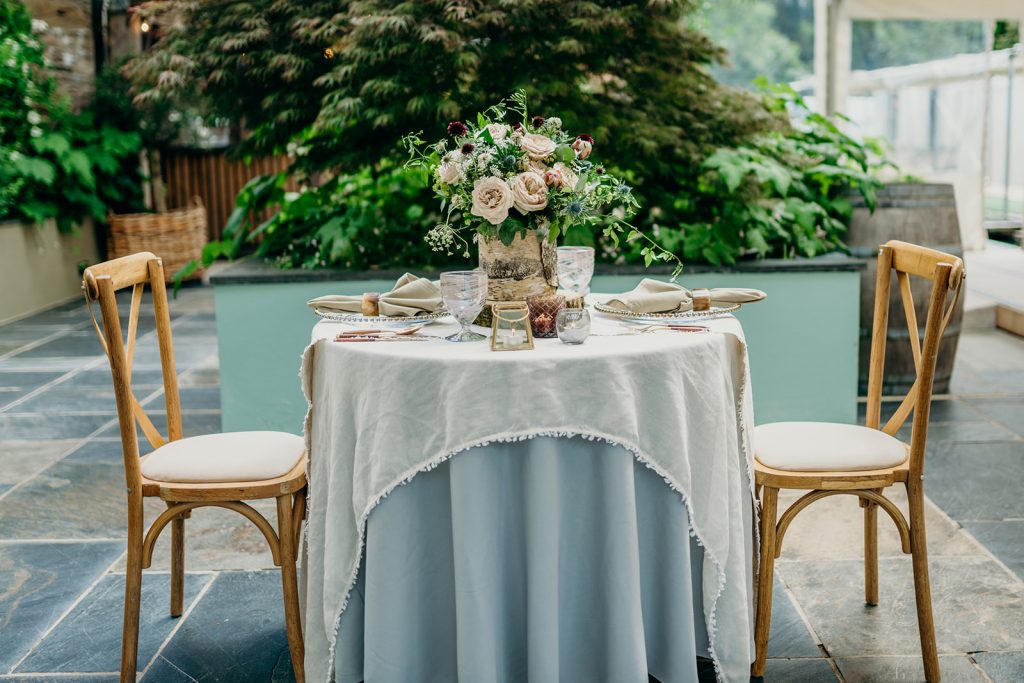 Eloping is the answer to all these why’s

Just because you don’t want a ton of people at your wedding (for whatever reason and maybe I haven’t even touched on your reasons for eloping) doesn’t mean you don’t want all the wedding bells and whistles, fab exclusive use location, luxurious accommodation on site, Chelsea gold medal winning florist, great wedding photos all taken in an hour, wedding breakfast, mini wedding cake.   You do want that right?  Tiny weddings definitely need celebrating too.

So if you’re looking for a way to have all the wedding trimmings on a tiny scale, a celebration in a way that’s meaningful for the two of you, you’re in the right place.

Download our elopement brochure – yep all the info you need including pricing is in there.   And email me at nicola@lowergrenofen.co.uk about your preferred date.   And let’s get your elopement wedding underway.

All photos on location at Ever After by Clare Kinchin Photography.

All flowers by Flowers et al. 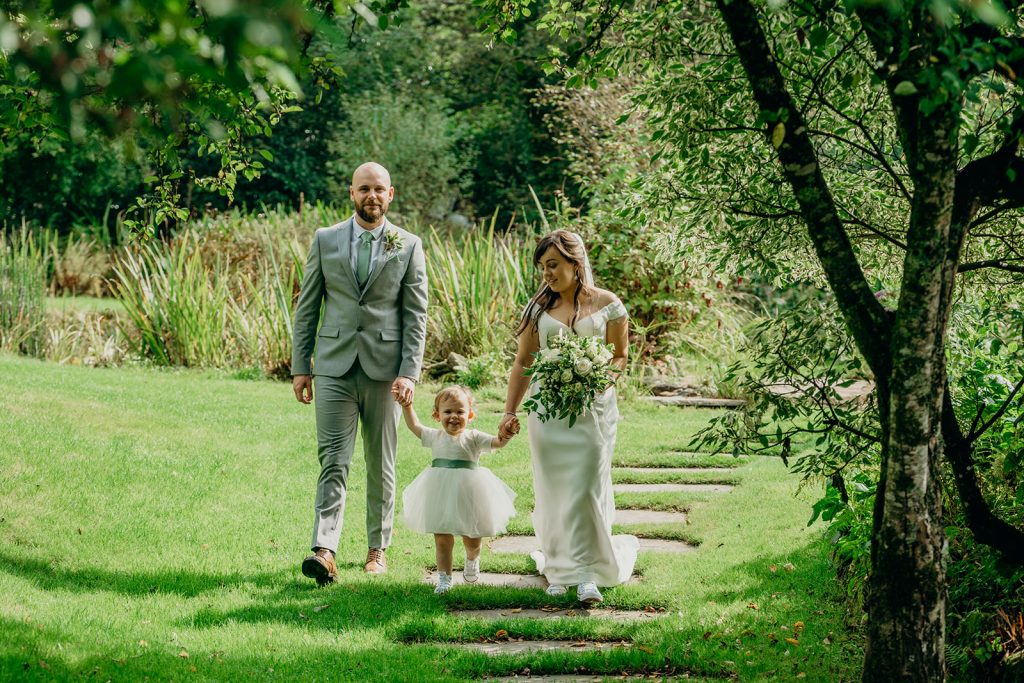